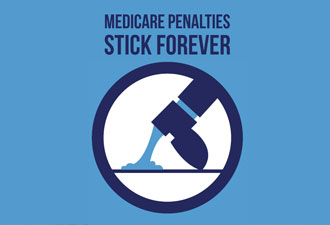 All it takes is one bad decision or missed deadline for a client enrolling in Medicare at age 65 to face years of paying monthly Medicare penalties. If they’re relying on you to prepare them for the future, pointing out potential Medicare pitfalls isn’t a courtesy — it’s a must.

Here are the main points (and an infographic) for you to remember and to convey to clients:

So just how much are these late-enrollment penalties? While it’s impossible to determine an accurate total cost of their late-enrollment penalties —  because they are calculated on figures that change each year — we’ve drawn some illustrations so that you can still get a rough idea of how costly they can be. Because these illustrations do not take into account normal cost increases of Medicare each year, actual costs would likely be higher than these estimates.

The cost of this penalty depends on how long your client went without Part D or creditable prescription drug coverage. Medicare calculates the penalty by multiplying 1% of the national base beneficiary premium by the number of months your client could have been enrolled in a Part D plan but was not, rounded to the nearest $0.10. That amount is then added to the premium of the plan the client chooses to enroll in. The base beneficiary premium can change each year, so the exact amount of the penalty you pay can also change each year.

Mary, whose Initial Enrollment Period ended in October 2017, elected not to take a prescription drug plan because she was not on any medications at the time and didn’t expect to be put on any in the foreseeable future. (While we typically would advise against this, we do see it all too often.) In September 2018, Mary learns at her annual checkup that she has high blood pressure as well as elevated cholesterol levels. (Both happen often in later adulthood.) Mary’s doctor prescribed two medications for her to take daily. To help pay for her prescription drug costs, Mary decides she wants to enroll in a Part D plan. The plan she chose has a premium of $25 per month. However, her premium will actually be higher due to the late-enrollment penalty, and she can't enroll in a Part D plan until the Annual Election Period (Oct. 15 through Dec. 7, with coverage going into effect the following January). While the penalty sounds somewhat small — an additional $4.32 a month — that, roughly speaking, could add up to nearly $780, if Mary lives an additional 15 years.

As is the case with Part D, the Part B penalty is incurred when your clients are first eligible but fail to sign up. There are some exceptions — such as creditable coverage from an employer — in which your client can delay the Part B premium and the penalty is waived. However, if your client does not have creditable coverage and fails to sign up for Part B when first eligible, your clients will incur a 10% penalty on Part B for each full 12 month period that he or she could have signed up for Part B but didn’t.

Tom, who is single and filed his taxes with a modified adjusted gross income (MAGI) for 2019 of $135,000, was eligible for Medicare and his Initial Enrollment Period ended in October 2014. Tom believes now is a good time to enroll in Part B and purchase supplemental coverage to help with his medical costs. From October 2014 until now, Tom was not covered under any employer group plan or other coverage that could have been deemed creditable, so Tom will incur a Part B penalty. Furthermore, Tom can only enroll in Part B during the General Election period from Jan. 1 through March 31 each year, with coverage beginning July 1. Because Tom’s MAGI was over the standard amount, he will pay a base rate of $352.20 for his Part B Medicare coverage and incur a penalty in addition to that. The penalty, however, is based off the standard Part B premium rate, which is $135.50 in 2019. The penalty is significant: $54.20 a month. Assuming he lives another 15 years, that could add up to more than $9,756 in penalties!

Again, these illustrations don’t take into account increases in premiums on which they are calculated —which generally go up each year — so they are rough. But they illustrate how important it is for your clients to make informed decisions about enrolling in Medicare. That 65th birthday is an important one!

Help your clients understand that penalties can be assessed if they don’t initially enroll in Medicare Part B and Part D, that these penalties can stick with them and add up over time and that they can contact Medicare BackOffice for help by calling 1.877.385.8083 or having them fill out this form. That advice can save them hundreds, if not thousands, of dollars.

Back to News Library